As this year’s amateur draft draws near, this week’s minor league rundown will focus exclusively on last year’s draft selections.

With only some of the 2013 class actually playing with full-season clubs, many of the Phillies’ 2013 picks will be slated to open their season with short-season Class A Williamsport after spending the past couple months in extended spring training.  Players on that list include 3rd round pick Cord Sandberg, 4th round selection Jake Sweaney as well as 7th rounder Trey Williams.

Here’s a look at how the active draft class from last year is performing this season. 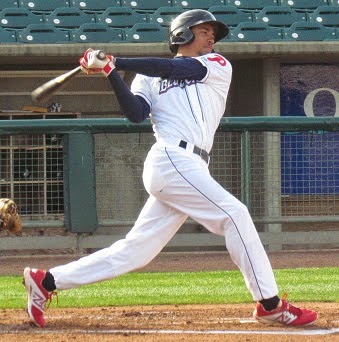 Last year’s top draft choice (16th overall) J.P. Crawford has quickly shot to the top of Phillies prospect rankings and will be among the top 25 prospects in all of baseball as those lists get refined and updated in the coming weeks and months.  The 19-year-old shortstop has looked tremendous in his time as a pro. Less than one year removed from high school, the lefty hitting Crawford is batting .322 with 14 doubles, three home runs, 17 RBI and nine steals in 47 games with Class A Lakewood.  Having shown well-rounded defensive skills as well, the California native appears to be quite a get by the Phils, who selected Crawford with their highest pick in 12 years.

Second rounder Andrew Knapp, a catcher, is still recovering from Tommy John surgery that took place last October and hasn’t played defense this season.  The 22-year-old has struggled as a designated hitter for Class A Advanced Clearwater, sporting a .157/.222/.205 slash line through 23 games.  Knapp, a UC Berkley product, is a leader on the field and should be able to turn things around at the plate as his overall health improves.

Third baseman Jan Hernandez (first name pronounced like “John”) , taken in the 3rd round (96th overall), spent a short stint with Class A Lakewood this year as injuries dictated a brief need.  The 19-year-old righty batter posted a .145/.217/.255 slash line in 17 games before being reassigned to extended spring camp.  Expect to see the Puerto Rico native with Williamsport later this month.

Outfielder Justin Parr was moved to extended spring training after an awful start to his season with Clearwater.  The 23-year-old posted a .118/.163/.132 slash line in 22 games with the Threshers.  The lefty batting Parr was the Phils’ 8th round pick in 2013.

Pitcher Shane Martin, the Phils’ 9th round pick, appeared in seven games (three starts) for Lakewood this season before being reassigned to extended spring training.  The 23-year-old right-hander tallied a 0-2 record along with a 10.45 ERA while striking out 10 and walking five in 20 2/3 innings.  The Southwestern Oklahoma State product should be a part of Williamsport’s rotation.

Righty hurler Jon Prosinski, taken in the 10th round, was recently demoted to Lakewood after beginning the season with Clearwater.  With the Threshers in the Florida State League, the 23-year-old sported a 0-4 record with a 6.56 ERA and a .343 batting average against in nine starts. In his lone appearance with the BlueClaws, Prosinski, a Seton Hall product, threw six scoreless frames.

Lee Ridenhour, a righty hurler taken in the 16th round last year, has a 1-4 record with a save and a 4.91 ERA through 15 relief outings for Clearwater.  The 24-year-old pitched at three levels last year and could make the move to Double-A Reading this season, if a suitable need pops up.

With a 3.78 ERA and a save to call his own through 12 games, righty reliever Daniel Child, who opened the season in extended spring, has held a spot in the Clearwater bullpen.  Additionally, though, the 21-year-old has posted a .328 batting average against and has struck out eight and walked 12 in 16 2/3 innings, which isn’t very appealing.  Child was the Phils’ 18th round pick last year.

Catcher Corey Bass, the team’s 20th round pick, made his season debut over the weekend, going 0-for-3 for Clearwater.  The promotion for Bass, 23, was made necessary when Reading backstop Lars Davis hit the disabled list this week and Threshers catcher Logan Moore was promoted in order to fill his spot.

Left-handed pitcher Christopher O’Hare, last season’s 23rd round pick, also made his season debut this past weekend, allowing an earned run while striking out two and walking two in 1 1/3 innings for Lakewood.  The 23-year-old appeared in five games at three levels last season.

Cody Forsythe, a 25th round draft choice, has looked extremely solid as Lakewood’s closer this season.  In 18 games, the 23-year-old lefty sports a 2-0 record with eight saves and a 1.83 ERA while striking out 18 and walking four through 19 2/3 innings.

Righty pitcher Chris Burgess appeared in eight games with Clearwater this season, but was reassigned to extended spring training after posting a 12.91 ERA and a .405 batting average against while striking out two and walking four in 7 2/3 innings out of the bullpen.  The 23-year-old Oklahoma Christian University product was the Phillies’ 26th round pick last year.

Tyler Viza (pronounced VY-za) has been a bright spot for the Lakewood staff this year.  The right-handed starter’s 2-6 record and 4.66 ERA don’t accurately reflect the progress he has shown and the way he has kept his team in games through 10 starts.  A surprise to open the year on a full-season roster, the 19-year-old displays solid poise and great mental toughness for such a young pitcher.  Viza was taken in the 32nd round.

Note: The Phillies failed to sign four of their top 14 (5th, 6th, 12th and 13th round) draft selections last year.  Several others, such as 14th round selection Sam Dove and 15th round pick Logan Pierce, have already been released by the club after unimpressive stints in the pro ranks.