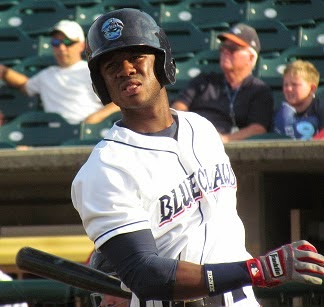 Six years after he was their top draft selection, the Phillies have finally pulled the trigger and cut disappointing outfielder Anthony Hewitt.

Hewitt had struggled mightily in his pro career, but looked outmatched this season with Double-A Reading where he posted a .140 batting average in 34 games before a recent demotion to Class A Advanced Clearwater. In eight games since the move, the 25-year-old went 4-for-31 (.129 avg). He walked only once this season.

It was time to cut their losses and the Phillies did just that.

In an exclusive interview with PhoulBallz.com last month, Hewitt was not discouraged and, in fact, was very optimistic, asserting that his output would turn around.

“It’s a game of failure,” Hewitt stated. “Just, right now, no hits are falling. No luck’s turning my way, but I’m sure that tomorrow, today, whenever it’s gonna happen, good luck’s gonna fall my way, hits are gonna start falling my way. Everything comes in bunches and I can wait till the bunches start coming my way.”

The offense might bounce back for Hewitt, but, when it does, it won’t be in the Phillies organization.