Prior to Class A Lakewood’s home contest against Delmarva on Friday, I talked with pitching coach Les Lancaster about several hurlers on the BlueClaws’ pitching staff.

Lancaster, who pitched seven season in the majors with the Cubs, Tigers and Cardinals, joined the Phillies as a coach in 2011 after managing in the independent leagues for 11 seasons.

Pitchers discussed by Lancaster were right-hander Yacksel Rios, who sports a 2-0 record with a 3.52 ERA and a .198 batting average against in six starts since joining the ‘Claws’ rotation, 19-year-old Tyler Viza and his progress this season, Temple product Matt Hockenberry, last year’s 24th round pick righy Will Morris, injured starter Drew Anderson, righty closer Ulises Joaquin and the returning 2013 BlueClaws All-Star Yoel Mecias, who is fresh off Tommy John surgery.

Read ahead for Lancaster’s comments on the listed topics. 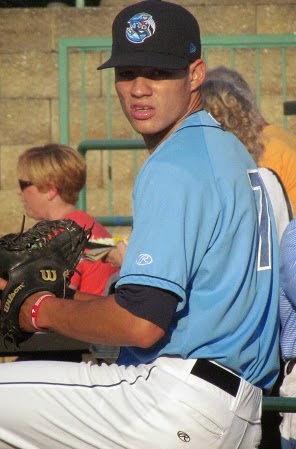 Yeah, Yacksel, I had him last year in Williamsport.  He was a starter for me.  Started out this year in the ‘pen, of course, and we wanted him to work on his secondary pitches.  Mainly his slider.  So, we decided to put him in the rotation where he’ll have some more opportunities and he’s really done a great job for us.  You know, hitters don’t get too good of swing off of him, he hides the ball well.  Plus fastball with movement, good change up and the slider’s coming along, so, as long as he can contribute and keep throwing those, he has a chance.

Well, he started out the season real good and everything.  He’s a strike thrower, he comes right at you and everything.  He kind of got away from his pitching style…kind of went in a slump, you know, didn’t get late in the game…but now, we’ve got him back on track.  The main thing is pitching inside.  He’s pitching inside more and he throws strikes and we’re developing the slider as well.  And he’s come a long way since midseason.

Yeah, Matt, I mean, he’s a bulldozer.  He comes right at you with everything he’s got.  He’s got four pitches.  He throws strikes.  We’re watching his innings and pitch counts, because he pitched a lot in college and everything, so that’s the reason why he’s out in the ‘pen right now.  He’ll be a one-to-three inning guy for us.  He’s done a great job.  We’ve put him in some tough situations and he was able to handle it.

Yeah, Will, he’s definitely given us some quality innings.  He’s another strike thrower that we count on.  Little bit average, below average fastball, but a plus change up, which is really what we call a Bugs Bunny change up, ’cause he just pulls the string on it and that’s been a big key for him.  Anytime a pitcher can throw strikes with his fastball and command his secondary pitch like that, especially his change up, he has success.

Oh yeah, I think so.  I think some of these pitchers here, they haven’t reached their potential yet.  They’re gonna get stronger and everything.  And their mechanics are going to improve.  They’re going to get stronger.  Arm delivery and everything and when that happens, something clicks.  Whenever it clicks it clicks.  Mario Hollands is another example.  I mean, he was an 88 to 90 guy and all of a sudden he’s 95, 96.  I mean, just when it clicks, it clicks and if they can run with it, great things will happen for him.

Well, he just had a little strain in his elbow.  He’s just starting to throw and everything.  You know, they won’t rush him back.  He’s a real prospect for us.  Another young kid, fastball’s coming along.  It was a lot higher than it was last year.  I had him last year and it probably jumped up three of four miles an hour this year.  His mechanics are getting him back with a consistent arm delivery.  And, you know, (he’s) somebody that we take high stock in, so they won’t rush him.

Depending on how he’s doing in his throwing program and if he has any setbacks or not and how much they want to push him, he’ll either stay in the GCL and pitch down there or send him out once he’s ready.  We’ll just have to wait and see.

He’s been a great big surprise for us.  Started the season good.  Went in that slump a little bit.  I think his confidence was a little too high and it brought him down to Earth a little bit and I went and had a long talk with him and, I mean, now he’s a total different pitcher.  He’s throwing strikes consistent
with all his different pitches and everything.  Plus fastball, plus change, plus slider.  You know, I figure it’s just a matter of time before he’s gonna get his change to go to Clearwater.