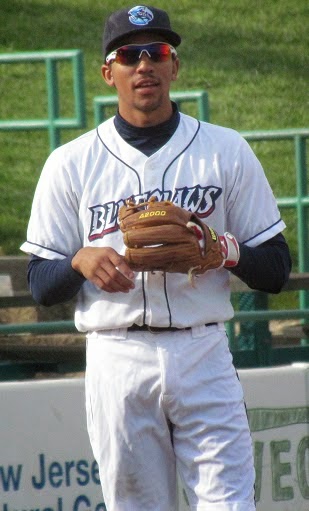 In Team USA’s 3-2 victory over Team World on Sunday, shortstop J.P. Crawford went 1-for-2 with a single and a stolen base for the winners.  Third baseman Maikel Franco went 0-for-2, including a fly out with a runner on base for the final out of the game for the losing squad.  The contest was nationally televised.

Crawford has tallied a .235 average with four homers and eight RBI in 21 games since he was promoted to Class A Advanced Clearwater.  The lefty batting 19-year-old was an All-Star this season with Class A Lakewood, sporting a .295/.398/.405 slash line in 60 games in the South Atlantic League.

Scouts are very high on Crawford’s skills and it’s likely he’ll begin popping up near the top of national prospect rankings before long.

Franco, began the season with some struggles, but has heated up as of late.  After pledging to fans in a recent interview that can be seen on this week’s Phillies Nation TV (new episodes air each Tuesday at 6 PM on The Comcast Network) that he was about to turn things around offensively, the 21-year-old has posted a .390/.419/.707 slash line in nine games this month.

Overall this season, Franco is batting .230 with six home runs and 42 RBI in 87 games with Triple-A Lehigh Valley.

The MVP of the Futures Game was Texas prospect Joey Gallo, who mashed a two-run homer in the sixth inning to give his team a lead that they wouldn’t surrender.

The 21-year-old was selected by the Rangers 39th overall in 2012, the pick immediately before the Phillies’ turn in that draft.  The Phils drafted right-handed hurler Shane Watson, who is still sidelined following off-season shoulder surgery.