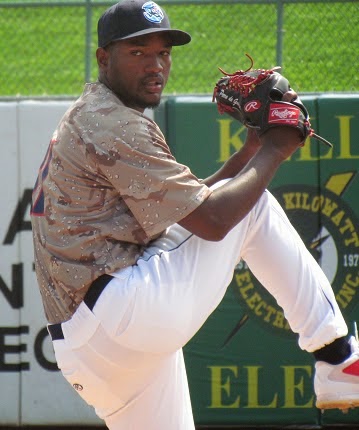 As prevalent as reconstructive elbow surgery has become for baseball players, it just comes with the territory, if you ask Phillies lefty pitching prospect Yoel Mecias.

The Venezuela native was an All-Star last year for the Class A Lakewood BlueClaws when the team hosted the South Atlantic League’s annual showcase of its top players.

As a 19-year-old Mecias was impressive, posting a 4-3 record with a 3.79 ERA with 70 strike outs in 57 innings through 13 outings (11 starts) in 2013 for the ‘Claws, prior to being sidelined with an elbow issue that resulted in Tommy John surgery.

As a rising prospect that had begun garnering plenty of attention throughout the Sally League, Mecias was disappointed to have his breakout campaign cut short, but he didn’t let the negative feeling settle in too deeply.

“In the beginning the injury was hard on me, but I knew it was all mental. I just tried to take that away. For me, I just had to be patient and just work. It’s part of the game,” Mecias stated with the help of Lakewood hitting coach Lino Connell, who translated the youngster’s thoughts.

Mecias returned to the mound, facing opposing batters in under a year when he made his season debut last month with the rookie level Gulf Coast League Phillies. In four starts in the GCL, the six-foot-two 160-pounder sported a 0-1 record with a 4.76 ERA while striking out 10 and walking eight in 17 innings.

According to Mecias, the rehab process is in the past and he’s working on getting the rest of his body back to where it was prior to the injury.

“I’m not concerned with the elbow anymore. I feel great. I’m just working hard to get 100-percent in shape overall,” Mecias declared.

He’s looked sharper since returning to Lakewood, tallying a 1-0 record while allowing a lone run, which was earned, on four hits in 10 innings of work while striking out eight and walking three.

The club’s pitching coach, former big league hurler Les Lancaster, has been pleased with the output the resilient Mecias has put forth in two outings since joining the BlueClaws.

“He’s just coming off the surgery and everything, but (he) looks good. He’s getting stronger each time out,” Lancaster said with a bit of pride in Mecias’ progress.

The Phillies will watch Mecias, who was inked by Venezuelan scout Jesus Mendez in December, 2010, closely and have mandated per-outing caps on his activity, in order to be cautious with his workload.

Phillies fans looking for a bright spot within the system of late should look no farther than Mecias’ recent progress.

Ranked highly among Phillies prospects, the athletic looking Mecias throws a fastball that was regularly clocked in the low-90’s prior to the injury and a plus change up. He continues to work on his breaking pitch, a slider, which needs some improvement according to coaches.

With things now on the right path for Mecias, he’s ready to help the BlueClaws down the stretch for the remainder of the season and has already been prepared for what’s next.

“They already told me that I’ll go to instructs, so be ready to pitch more after the season,” Mecias asserted.

Mecias also said he would possibly pitch in the Venezuelan Winter League if the Phillies allow it, but that may not be likely. A full off-season of rest should be on the agenda for the promising young pitcher before he becomes he buzz of the organization next year.