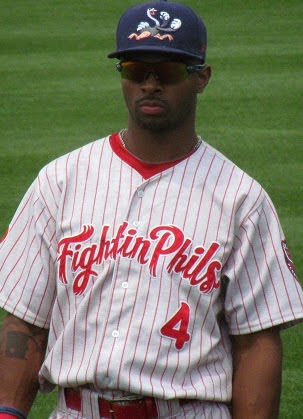 You’d have a difficult time finding a hotter batter in professional baseball right now than Double-A Reading outfielder Zach Collier and the increase in production couldn’t have come at a better time.

In his last six contests, the six-foot-two 200-pounder has been scorching the ball to the tune of a .417 average with seven home runs and 11 RBI, helping his club notch five straight wins.

With veteran slugger Jake Fox (.330 avg, 17 HR, 56 RBI in 54 games) leading the Reading Fightins offense for two months since signing with the Phillies, it was only a matter of time before his outstanding production rubbed off on those around him.  For Collier, it was some verbal guidance from the 32-year-old as well as Fox’s generous nature with his personal equipment that helped.

“He’s helped me out a lot, you know, just talking, going over hitting and everything like that.  I’m actually swinging (Jake’s) bats, his model.  And I’ve broken a couple and now we’re down to one, so I’m trying not to break this (last) one,” Collier said on this week’s edition of the PhoulBallz Podcast.

Collier, who was selected 34th overall by the Phillies in 2008, didn’t give all the credit to Fox and his wood, however, as the young lefty hitter described how he’s stayed focused on getting his output at the plate together.

“I just keep working hard with Rob Ducey, our hitting coach, and just continue to stay aggressive and be ready to hit, you know,” Collier added.  “I’ve been seeing the ball really well lately and that’s been the difference.”

If there’s one player in the Phillies organization that needed to turn his season around it was Collier, who entered the month sporting a .220 average with two home runs and 11 RBI in 61 games this season.

The 23-year-old stood by while formerly well-regarded outfield prospects, and teammates, were released one after the other this summer.  Former top draft pick Anthony Hewitt, key trade acquisition Tyson Gillies and a once promising Jiwan James all found themselves looking for their next opportunity over the past month-and-a-half.

Had Collier not proven he was making progress, he may have been next.

Despite watching his friends get their walking papers, the situation didn’t add pressure for Collier, who is steadily aware of a need to stand out in the developmental ranks.

“I try not to worry about that stuff,” Collier asserted.  “One thing I really want to work on and continue to focus on is how I go about the game.  This game is stressful enough as it is and I can’t make it any harder by worrying about things I can’t control.”

Collier cited some levels of frustration with his season prior to his bust out performance over the past week, but he has no problems maintaining a positive outlook and plans to build on his recent hotness.

“I may not have started the way I wanted, but I’m definitely going to finish a lot better than I started.”