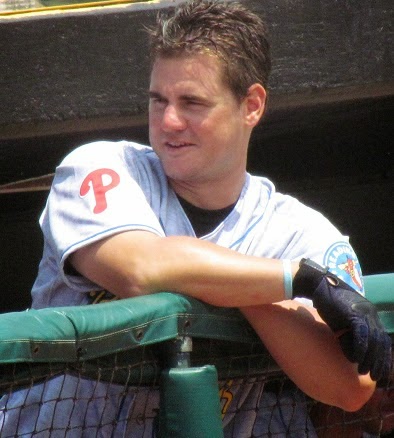 -Catching prospect Tommy Joseph is slated to have season ending surgery to repair an ailment in his left wrist.

The injury initially took place back in May, when the 23-year-old was part of a collision at home plate while playing with Double-A Reading.

As a member of the Fightins this season, the righty batting Joseph tallied a .282 batting average while slugging five home runs and driving in 19 runs in 21 games.  Joseph last played in mid-July when, after some rest, he rehabbed with the rookie level Gulf Coast League Phillies, going 5-for-20 with a double in six games prior to experiencing a setback with the injured wrist.

Reports state that the surgery will be performed by Dr. Don Sheridan, an orthopedic hand and wrist surgeon in Arizona.

Joseph was acquired from San Francisco along with two other players in 2012 for Hunter Pence.

-Miguel Alfredo Gonzalez made his Triple-A debut with the Lehigh Valley IronPigs on Saturday.  The 27-year-old Cuban notched a save while surrendering a hit and striking out one in a scoreless frame.  His fastball was clocked at 93-94 MPH during the outing.

The 27-year-old Cuban was signed to the three-year contract with a club option for a fourth year last summer by the Phillies.

-Right-handed reliever Hector Neris was promoted to the Phillies on Sunday to take the place of Phillippe Aumont, who was demoted after another rough big league outing on Saturday night against Washington.

Neris, a Dominican native, was signed by the Phillies in 2010.  In 40 combined appearances with Reading and Lehigh Valley this season, the 25-year-old put together a 5-2 record with two saves and a 3.82 ERA while striking out 45 and walking 24 in 63 2/3 innings.

-Following a month of June in which he posted a .162 average with a homer and 11 RBI in 27 games, IronPigs third baseman/first baseman Maikel Franco has sported a .327 average with four home runs and 23 RBI in the 27 games that followed.