Recently, Mike Drago of The Reading Eagle conducted a survey of experts, made up of local writers and other media members, designed to rank the top prospects in the Phillies developmental system.

The participating individuals, who are all close to the Phillies minor league system, were asked to rank their personal top 20, which were tabulated to determine the paper’s published list of top 15 Phillies prospects.  Individuals surveyed included Baseball America’s Josh Norris, Chris Rotolo of the Asbury Park Press, Mitch Rupert of the Williamsport Sun-Gazette as well as yours truly, Jay Floyd of PhilliesNation.com.

The collection of experts determined that last year’s first round draft pick, J.P. Crawford, who represented the Phillies in the MLB All-Star Futures Game this year, is the top prospect in the organization.  Crawford, 19, is widely expected to be the eventual successor to former National League MVP Jimmy Rollins at shortstop.

Last year’s Reading Eagle rankings featured Maikel Franco at the top.  The Dominican native fell to number three this year.  A few new names are also featured on the list. 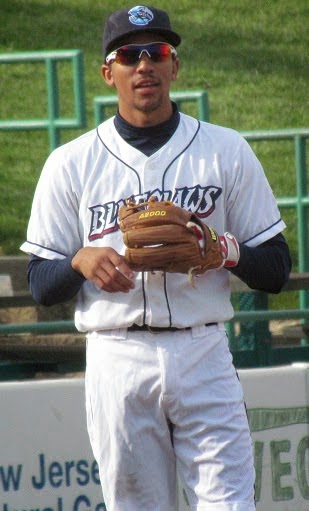 1 J.P. Crawford: Just 14 months after being drafted the California shortstop found himself playing in the All-Star Futures Game. At 19 he was the youngest player on the Team USA roster and the second-youngest in the game. He was moved up to high Class A Clearwater in mid June, his third level in little more than a year. He’s hit at all of them and carries a .295 batting average and .388 on-base percentage through his first 720 professional games.  (ed. note- Crawford has played just 170 pro games)

2 Aaron Nola: The Phillies desperately needed a fast-moving, strike-throwing starting pitcher when they tabbed the LSU right-hander in the June draft and that’s exactly what they got. He became the first Phillies draft pick to reach Double-A in his first professional season since 1986. He’ll likely start next season in Reading and end it in Philadelphia.

3 Maikel Franco: The Phillies were hoping the 21-year-old would be their third baseman by now but he had a poor spring training and an even worse spring at Lehigh Valley. After a lousy first half he finally started to hit, batting .343 in July. He’s still extremely young – almost six years younger than the average International League player – so there’s no reason to panic.

4 Roman Quinn: He was moved off shortstop when J.P. Crawford made his way to Clearwater in June, but that’s OK because the Phillies are short of outfield prospects. Quinn has been slowed by an Achilles tendon ruptured in the offseason yet still has an organization-leading 29 steals, is a switch hitter and figures to cover lots of ground in center. He’s batting just .251 at Clearwater but he just turned 21 in May.

5 Jesse Biddle: The left-hander out of Philadelphia has been an enigma. The former first-round pick has great stuff but his career has gone sideways since arriving in Reading last season. At times he’s dominant, at other times his command disappears. The concussion suffered in May leaves a cloud over his season. It’s hard to gauge how much of an impact that’s had on him. The good news: He’s still just 22 and lefties develop late.

The remainder of the top 15 rounded out with the following 10 players:

Injured hurlers Adam Morgan and Shane Watson fell from the Reading Eagle’s rankings after making the list last year, as did catchers Tommy Joseph and Cameron Rupp. Also, right-hander Ethan Martin, who spent some time with the big league club this year, missed the list.