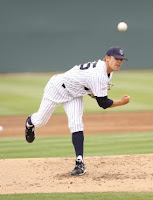 This September, right-handed pitcher Eric Pettis was tossed into the proverbial fire. The Phillies wasted no time moving their late-round steal, from this year’s amateur draft, into the crucial postseason schedule of the defending South Atlantic League champions, the Class A Lakewood BlueClaws.

Pettis began his professional career swiftly after being selected by the Phillies in the 35th round of the 2010 draft with the Williamsport Crosscutters of the short season NY-Penn League out of UC-Irvine. The 6’2″, 200 pound hurler started and pitched in relief en route to posting an 8-0 record and a 1.37 ERA while striking out 67 batters in 59 innings with Williamsport.  At such a rate of progression, it may not be too long before Pettis figures into the Sports Betting calculations at the big league level.

By Labor Day this year, Williamsport had just missed the playoffs by the slimmest of margins and the BlueClaws were beginning their run at a second straight league title, so Pettis, who opened many eyes while becoming a NY-Penn League All-star, was added to the Lakewood roster in an effort to fortify the bullpen.

Pettis was excited to join the BlueClaws at a time when their games meant so much, but asserted that it was certainly a difficult situation at times. “It was weird. It’s fun because it’s a big playoff atmosphere, but it’s tough because you’ve got to learn all your new teammates and the different quirks in the clubhouse and all that. It was different, but it was fun because I was jumping right into a playoff atmosphere,” Pettis stated in an exclusive interview.

Lance Carter, the Crosscutters’ pitching coach, is credited, by Pettis, with helping Pettis achieve his tremendous success so early in his pro career, by instilling the proper methods to have a game plan each time he took the mound.

“He did a great job. Talking with me, through every inning, every at bat, to just see what my mind-set was. We worked on mechanical things here and there, but it was more about how you approach each hitter and how you look at each game and prepare yourself.”

Pettis, a California native, made his Class A debut in the BlueClaws’ postseason opener this year, throwing a scoreless 1 1/3 innings against the Hickory Crawdads (Texas affiliate). “First impressions are a big thing. It was crunch time for (the team) and they’re not going to throw me in there if they don’t have confidence in me, so I was just glad to have success in my first outing, so I could continue getting out there,” Pettis said.

The draft bargain, Pettis, threw 4 1/3 innings in the postseason for Lakewood, allowing just 1 earned run in the process. Pettis projects to begin next season at Single A Lakewood, however, he could certainly be on the fast track to higher levels.

Austin Hyatt, who was a 15th round draft choice by the Phillies in 2009, cruised through NY-Penn league competition in his first professional season, then earned a promotion to Lakewood, to help them during their stretch run toward the SAL title. Hyatt was 3-0 with a 1.22 ERA in 18 regular season games with Williamsport and Lakewood last year. He then excelled with the High-A Level Clearwater Threshers in 2010 (11-5 record, 3.04 ERA, .220 opponents’ average) and earned a promotion to Double A Reading by mid-August.

The difference in age, between Hyatt and Pettis, could impact how the organization assigns these players differently by comparison, though, as Hyatt was 24-years-old for most of the 2010 season and age often plays a role in level assignments. Pettis will be 22-years-old until June, so the Phillies will likely feel more comfortable taking a longer look at Pettis in Lakewood, especially with limited room expected on the Threshers’ roster as many young prospects (Trevor May, Brody Colvin, Jarred Cosart, Colby Shreve, Jonathan Pettibone & more) are potentially in line to get their shot on the Clearwater mound in 2011.

Going forward, Pettis’ outlook should be agreeable with whatever the Phillies determine to be the best course of action, as he will surely continue to be a young prospect to watch, headed into the 2011 season.

“I’m just going to go about my business every day, you know. I just want to try to build on this early success and keep getting better and learn as much as I can.”