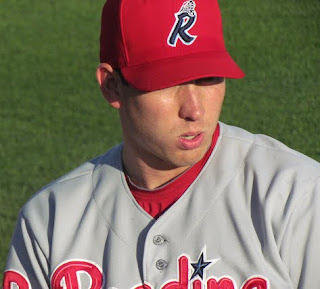 Right-handed pitcher Austin Hyatt has been a bit of an underrated talent since joining the organization in 2009. Often considered old for each level he pitches in, Hyatt has simply excelled in his career and has recorded strong stats at every level. The University of Alabama graduate had another great season in 2011, proving to be the ace of the Double-A Reading Phillies’ staff.

In 2011, Hyatt was focused on improving the mental side of his game. His ability to read hitters at the higher levels of the minors has certainly benefited the 6-foot-3-inch 205-pounder. Working closely with Reading pitching coach Bob Milacki on analyzing opposing batters’ approaches were evident as Hyatt shut down some of the best hitters in the Eastern League. Facing the eventual league champion New Hampshire Fisher Cats that included EL Most Valuable Player Travis d’Arnaud, highly regarded Blue Jays prospect Anthony Gose as well as All-Stars Mike McDade and Moises Sierra, during the regular season, Hyatt went 3-0 with a 1.00 ERA. In addition, he went on to allow just 1 earned run in 7 innings, while striking out 9, in his lone postseason outing, against New Hampshire, who ousted Wild Card entrant Reading from the playoffs.

In 2010, Hyatt began the season with Class A Advanced Clearwater, where he tallied an 11-5 record with a 3.04 ERA in 23 games and was named Florida State League pitcher of the year. In August, the Georgia native joined Double-A Reading where he went 1-0 with a 4.91 ERA in 4 starts.

Immediately as a pro in 2009, Hyatt made an impact. As a member of the short season Williamsport Crosscutters, Hyatt dominated en route to becoming a NY-Penn League All-Star, posting a 3-0 record with a 0.66 ERA and a .141 batting average against in 17 games (5 starts). With Williamsport, Hyatt struck out an impressive 81 batters in 54 1/3 innings. Late that season, he earned a promotion to Class A Lakewood for their playoff run and he pitched as a reliever in all 5 of the BlueClaws’ postseason wins on their way to the South Atlantic League championship.

Hyatt’s pitch repertoire includes a mid-90’s fastball, an increasingly lively slider and a good change up. Sporting a K/9 rate of 11.03 in 3 pro seasons, Hyatt’s biggest advantage with his fastball is not necessarily the velocity, it’s his arm angle. The dropped down delivery is deceiving to batters who regularly have a difficult time picking up the 2009 15th round draft choice’s pitches.

After spending time this off-season working out and throwing with old amateur teammates and his brother Jared, a former Texas Rangers farmhand, and spending some time working out in Clearwater this January as part of a mini camp of Phillies minor leaguers, Hyatt is targeting a step upward on the developmental ladder and taking the mound for the Triple-A Lehigh Valley IronPigs. Once he tackles the International League, he’ll be focused on taking the next step to the big leagues.