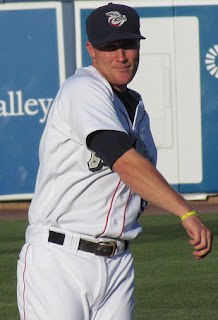 Third baseman Cody Asche has been on a torrid pace of late. Asche, a University of Nebraska product, is showing more and more that he’s ready for a bigger challenge. The 23-year-old lefty batter has gone 14-for-33 (.424 avg) along with three doubles, five homers and 12 RBI in his last eight contests with the IronPigs.

Overall this season, Asche, who represented Lehigh Valley in the Triple-A All-Star Game earlier this month, is batting .295 with 15 home runs and 68 RBI in 104 games.

On the latest edition of the PhoulBallz Podcast, Asche was featured as a call-in guest. When asked when he’ll feel ready for the bigger challenge of the major leagues, he said the following:

“Whenever (the Phillies) tell me. That’s when I feel like I’m ready. There’s a lot of guys in this organization that are really smart and they know what they’re doing and they’ve been through this before with many players, so, you know, I 100-percent trust what they have in store for me and what they have planned for me. So, until they call me and say, ‘Hey, you’re ready! Let’s go do it.’, then I’m gonna keep working hard to be the best player I can be.”

Lefty pitching prospect Jesse Biddle has had a pair of considerably poor outings in a row for Double-A Reading. On July 23rd, against Binghamton, the Phillies 1st round draft pick from 2010 allowed four earned runs while lasting just 2/3 of an inning. His next time out, against New Britain on Sunday, the 21-year-old surrendered five earned runs in 1 1/3 innings. The rough stretch has raised Biddle’s season ERA from 3.19 to 3.89.

Class A Lakewood right-hander Nic Hanson has been exceptional since coming off the disabled list with a groin issue. The six-foot-seven 210-pounder has posted a 1-1 record and a 0.72 ERA while striking out 16 and walking two in his last four starts. Overall this season, last year’s 16th round draft pick has a 2-2 record with a 2.38 ERA and 7.13 K/9 mark in 16 outings, including a rehab appearance with the Gulf Coast League team.

Also for Lakewood, first baseman Art Charles has had a hot week, going 10-for-26 (.385 avg) with four doubles, two triples and a home run along with 11 RBI over his last six games. Charles locked up a 4-3 win for the BlueClaws against Greenville on Sunday, as he mashed a two-run walk off triple with two outs in the bottom of the 9th inning.  The 22-year-old left-handed hitter was acquired from Toronto during the preseason for pitcher Michael Schwimer.

In the rookie level Gulf Coast League, outfielder Wilmer Oberto and this year’s first round draft pick shortstop J.P. Crawford rank 1st and 3rd in the league in OPS respectively, with 1.010 and .938 marks. The 20-year-old Oberto, a lefty hitter, has multiple hits in three of his last four games, while the 18-year-old Crawford, also a lefty batter, has swiped four bases in his last three contests.