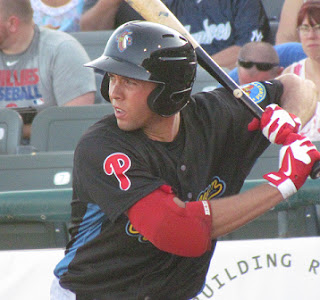 Altherr, 22, has long been considered among the best athletes in the Phillies system since being drafted in the ninth round of the 2009 draft. Altherr has responded well to his first taste of High-A Clearwater, hitting .276/.337/.464 with a career-high 12 HR and an impressive 21 steals in 25 attempts.

Rupp, the Phils third round pick in 2010, will be 25 when the Arizona Fall League commences. Rupp began the year in a platoon with former prospect Sebastian Valle in Reading but quickly outplayed his counterpart from Mexico. Promoted mid-season to Lehigh Valley, Rupp seized an opportunity created by Tommy Joseph‘s injuries, hitting .272/.314/.434 with 6 homers in 50 games. His 14 homers across two levels are a career high.

Giles, Nesseth, Simon, and Wright are all pitchers but couldn’t be more different. Giles was a seventh round pick in 2011 and was seemingly on the fast track to the Major Leagues. Frequently hitting 100 MPH, Giles has struggled with control in 2013. Nesseth, 25, is a control-based reliever who has surprised some with his sudden rise. After posting a 1.64 ERA in 44 IP for Reading, Nesseth now has a clean 0.00 ERA in five IP with the IronPigs. Simon, 23, has taken a step back (4.82 ERA) after looking like a shutdown reliever in 2012 for Reading following him arriving in the Jim Thome trade. Wright, 23, has fallen off most Phillies’ prospects lists, posting a 6.10 ERA in 24 games, 16 started for Reading, with career highs in HR/9, WHIP, and BB/9 IP.

Last year, the Phillies used the AFL as an audition for Zach Collier to make a decision on whether or not they should protect him on their 40-man roster. This year, similar decisions face them for Dugan and Altherr as well as Rupp and Nesseth while Giles, Simon, and Wright are likely headed there less as an audition but more likely to get more work in.