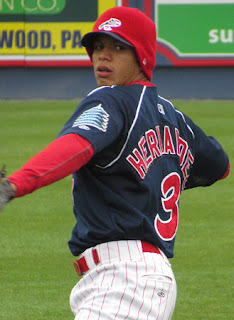 International League All-Star Cesar Hernandez is back in action after missing a few weeks with a wrist injury.  In three games since rejoining the Pigs’ starting lineup, Hernandez has gone 3-for-9.  Overall this season, the switch-hitting 23-year-old has posted a .315 average with two homers, 35 RBI and 31 stolen bases in 95 minor league games.

Left-hander Jesse Biddle struck out seven and walked none while allowing three earned runs in six innings in his latest start on Sunday.  The 21-year-old has a 3.13 ERA in four starts this month after posting a 7.11 mark in five July outings.  Biddle was the Phillies’ first round draft choice in 2010.

Third baseman Maikel Franco is 13-for-39 (.333 avg) with three doubles, a homer and eight RBI in his last 10 games.  Overall at two levels this season, the 20-year-old Dominican is batting .315 with 20 home runs and 90 RBI.  Franco, a righty batting slugger, represented the Phils in this year’s MLB All-Star Futures Game.

Corner infielder Harold Martinez is 15-for-35 (.429 avg) with six doubles and three RBI in his last 10 games.  The right-handed hitting 23-year-old has a .269 average with two homers and 24 RBI in 78 games with the Threshers this year.  Martinez was the Phils’ 2nd round draft pick out of the University of Miami in 2011. 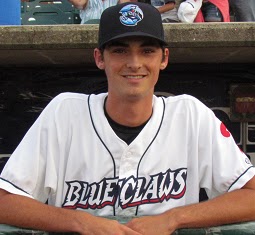 First baseman/outfielder Brock Stassi is 8-for-18 (.444 avg) with four RBI in his last five contests.  The lefty batting 24-year-old is batting .300 with three homers and 29 RBI in 76 games this season.  Stassi was the Phillies’ 33rd round draft pick in 2011 out of the University of Nevada, Reno.

Righty hurler Nic Hanson has a 7.90 ERA with 21 hits allowed in 13 2/3 innings over three starts with Clearwater since his promotion from Lakewood.  With the BlueClaws earlier in the season, the 21-year-old posted a 2-2 record with a 2.49 ERA.  Hanson was the Phils’ 16th round draft selection last year out of Golden West College.

Short stop J.P. Crawford was promoted to the BlueClaws from the Gulf Coast League this past weekend, but has not appeared in a game, as he was not in the lineup on Saturday and the team was rained out on Sunday.  During his time in the GCL, the 18-year-old, who was drafted this year as the Phillies’ top pick, sported a .345 batting average along with eight doubles, three triples, a home run and 12 steals.

Outfielder Samuel Hiciano slammed a pair of round trippers and drove in eight runs while going 3-for-5 in the Cutters’ win over Batavia on Saturday.  In 30 games this season, the 19-year-old Dominican Republic native is batting .240 with three doubles, a triple, six homers and 17 RBI.

On Sunday, a trio of Cutters righty hurlers combined to toss a no-hitter in an 8-0 victory over Mahoning Valley.  Righty Yacksel Rios struck out six and walked three in six innings of work for his fourth win of the year.  21-year-old Mark Meadors, the Phillies’ 21st round draft choice this year, worked the next three frames, while another 21-year-old Manaure Martinez closed out the landmark effort with an inning of work.

Outfielder Wilmer Oberto is the league leader in batting with a .351 mark.  The lefty hitting 20-year-old is also tops in the league in RBI with 42. Oberto, a Venezuela native, was signed by the Phillies in June, 2010.