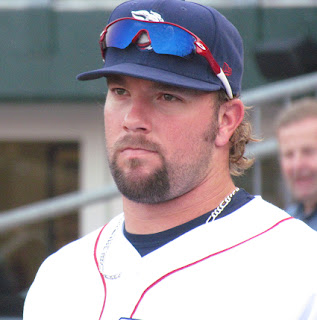 Over the weekend, Cameron Rupp sat in the players’ lounge area of the Coca Cola Park clubhouse watching the Phillies on television. On Tuesday, he’ll be in the clubhouse at Citizens Bank Park for his first major league game.

Rupp, the Phillies’ third round draft choice in 2010 out of the University of Texas, was among a collection of youngsters that was added to the big league roster as September call-ups this week. The strong defending 24-year-old is up for the challenge.

This season, Rupp posted a career high in home runs, with 14, splitting time with the Double-A Reading Fightins and the Triple-A Lehigh Valley IronPigs. Additionally, Rupp sported a .258 average and drove in 45 runs in 94 total games this year. The righty batting Texan, pleased with his own progress this year, had his eyes set on higher levels for much of the season.

“I knew the situation I was in, sharing time with (Sebastian) Valle in Reading and with Tommy (Joseph) being (in Lehigh Valley), you know, I don’t want to see anybody get hurt, but as soon as Tommy went down, that was kind of a goal of mine, to keep going and play and, hopefully, get an opportunity to go up and take advantage of it,” Rupp said, referencing the Phillies’ other well-known catching prospects.

Valle, once a highly promising minor league backstop, has been held back in Double-A due to stunted progress at the plate. Joseph, who was a prized acquisition from the Giants last year in the Hunter Pence trade, has missed considerable time with a concussion and reported shin issues this season.

Rupp entered this season as a .258 career hitter with 19 homers in three professional seasons at three levels, none of which were higher than Class A Advanced where he was a Florida State League All-Star last year as a member of the Clearwater Threshers.

Regarding his considerable strides in 2013, Rupp credits his Lehigh Valley teammates with helping him improve his mental game and daily approach. He feels that playing with the likes of Josh Fields and Pete Orr, who have a fair amount of big league experience between them, has provided him with the extra guidance many minor league players long for.

“You learn a lot more about the game than just what goes on out there. You learn about mentalities, you learn about situations, you learn more that just what you see watching the game as opposed to what’s going on, situations. They’ve been around long enough to know…how to explain things to younger guys like myself,” Rupp said with appreciation in his voice.

A promotion to the big leagues was not certain, but it was also not a full surprise to Rupp, who was aware that he had played well enough to be deserving of a shot at the top level of the sport sooner or later. The man that is often praised for his strong ability to lead a pitching staff has now achieved a lifelong goal and has a strong desire to stick by the methods that allowed him to reach it.

“It’s everybody’s dream to get up there and play at the big league level,” Rupp stated, despite using the word speechless to describe his reaction to getting news of a big league call-up. “You play this game ’cause you love it; one, and two; to get up to the big leagues and play for a long time…I’ll go out there and give everything I’ve got, like I always do.”