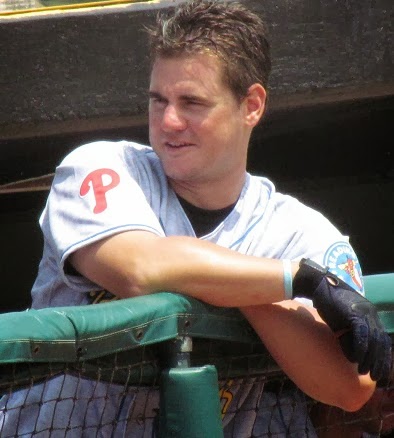 Acquired from San Francisco in a swap for Hunter Pence in July 2012, catcher Tommy Joseph quickly became one of the Phillies’ top positional prospects.  In the time since that trade, however, Joseph has struggled to produce as he has dealt with injury concerns that have prevented him from getting and staying hot.

Possessing a high ceiling bat and strong backstop skills, Joseph is still a prospect that could make a big splash in the Phils system if his health allows him to stay on the field.

In 2009 Joseph was was drafted in the second round out of Horizon High School in Arizona.  That season, he was recognized as an All-State player as he dominated opposing pitchers with his .494 average, 15 home runs and 36 RBI in 37 games played.

Upon making his professional debut the following year, the six-foot-one 215-pounder played with Class A Augusta of the South Atlantic League.  In 2010, with the GreenJackets, Joseph posted a .236 average with 16 homers and 68 RBI in 117 games.

In 2011, Joseph batted .270, while slamming 22 home runs and driving in 95 runs in 127 games for Class A Advanced San Jose. Over the off-season that followed, he was ranked as San Francisco’s 5th best prospect by MLB.com.

An All-Star in the Double-A Eastern League in 2012, the righty hitting Joseph tallied a .257 average with 11 home runs and 48 RBI in 108 games between Richmond and Reading.  Joseph spent a month following the 2012 regular season playing in the Arizona Fall League, where he sported a .204 average with one double and five RBI in 14 games played.

Overall, Joseph, who admired All-Star catchers Mike Piazza and Jorge Posada as a child, is an aggressive batter that can really drive the ball.  Having displayed impressive pop at multiple levels, Joseph entered last year with promising power potential.

The 2013 season was a tough one for Joseph, who experienced the third concussion of his career, which kept him out of action for a considerable amount of time.  The 22-year-old, who began last season with the Triple-A Lehigh Valley IronPigs and was sidelined after 21 games.  After some time on the shelf, Joseph played several rehab games for the rookie level Gulf Coast League Phillies and the Class A Advanced Clearwater Threshers before returning to Double-A Reading in early July.  The return didn’t last long, as further complications from his concussion and a reported shin issue kept Joseph, who batted .179 with four doubles, three home runs and 16 RBI in 36 combined games, out of action for the remainder of the regular season.

This off-season in nine games with the Estrellas in the Dominican Winter League, Joseph batted .192 with two doubles and two RBI while striking out 10 times without a walk.  His DR League numbers aren’t nearly impressive, but there’s certainly a silver lining coming out of Joseph’s time there, as Phillies director of player development Joe Jordan has stated in recent weeks that the youngster held up under the pounding behind the plate there, taking some mask and helmet impacts with no setbacks or lasting effects.

Defensively, Joseph, who possesses a top notch work ethic that his coaches and team officials love, is strong behind the dish and is capable of leading a pitching staff.  He also has a solid ability to keep the opposition’s running game under control with his arm.

Joseph’s skills behind the plate could be what keeps him in the big leagues, should his bat be the main tool that gets him there.  However, the possibility of changing positions, likely to first base, would be considered if ever concussion issues return for the Arizona native.

On the bases, Joseph runs as a catcher would be expected to and will never be a true stolen base threat.

Joseph should see a fair amount of reps in big league spring training this year, but is probably a lock to begin this 2014 campaign back with the IronPigs once again.