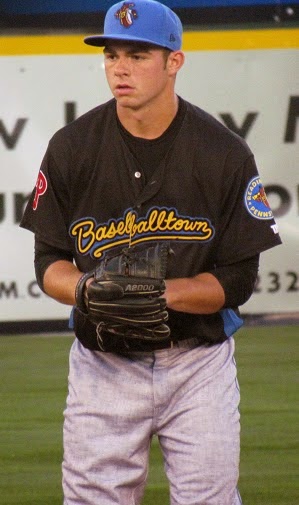 In recent years, Jesse Biddle has become the prospect that Phillies fans have heard the most about.  This year though, the hometown kid may go from highly touted prospect to major league rookie and the stuff that Philadelphia faithful have heard will be on display at the top level of the sport every five days.

Upon signing his first pro contract, Biddle quickly made his minor league debut, beginning his journey toward donning the uniform of the team he cheered on from the seats of Citizens Bank Park all throughout his teenage years. The graduate of Germantown Friends School in Philadelphia combined to post a 4-1 record with a 3.92 ERA and a .241 batting average against in 12 starts with the rookie level Gulf Coast League Phillies and the short-season Class A Williamsport Crosscutters in 2010.

The following year, Biddle became an All-Star in the Class A South Atlantic League as a member of the Lakewood BlueClaws. As the team’s most dependable starter through much of the season, Biddle posted a 7-8 record with a 2.98 ERA in 25 games (24 starts) and notched 124 strike outs in 133 innings pitched. Also, he held opponents to a .219 batting average.

In 2012, Biddle had a very good season, representing the Class A Advanced Clearwater Threshers in the Florida State League All-Star Game.  That season he sported a 10-6 record with a 3.22 ERA, a 9.53 K/9 mark and a .237 batting average against.

He followed that up with another All-Star campaign in 2013 for Double-A Reading.  In 27 starts, Biddle tallied a 5-14 record with a 3.64 ERA, a 10.02 K/9 mark and a .210 batting average against.  A troubling pair of outings in which he allowed nine earned runs in two total innings in July had a negative impact on his numbers.  Without those two stat lines, Biddle’s season ERA drops by a half run.

Confident in his own abilities, Biddle maintains a firm focus on the tasks at hand, even on off days. There is not a day that passes, during the season, in which the poised Pennsylvanian hasn’t done homework in some fashion to learn a bit more about the game of baseball. Biddle also has a great frame of mind and realizes that achievements and promotions won’t be handed to him and that he has hefty amounts of work ahead at all times.

His pitch repertoire includes a four-seam fastball that typically clocks in the 92-93 MPH range, but can reach higher.  He also features a dominating curveball that often leaves opposing batters looking foolish and a solid change up, which he has built confidence in to throw in any count.

Biddle enjoyed his first big league spring training this year, learning from the likes of Roy Halladay, Cliff Lee, Mike Adams and loads more veterans.  In two Grapefruit League appearances, he allowed four earned runs in three innings of work.  He has since been reassigned to minor league camp to lengthen his endurance before the season gets underway.

With an easy, over-the-top delivery, Biddle is a skilled hurler that will steadily improve as his career progresses.  No matter if he begins the 2014 season back in Double-A or with Triple-A Lehigh Valley, he’ll be one call away from the big leagues.  If the 22-year-old continues to progress at the pace he’s steadily shown in recent seasons, this should be the year in which he makes his big league debut.